Obama officials caught red-handed in most explosive abuse of power in U.S. history… bigger than Watergate… is Susan Rice going to prison? 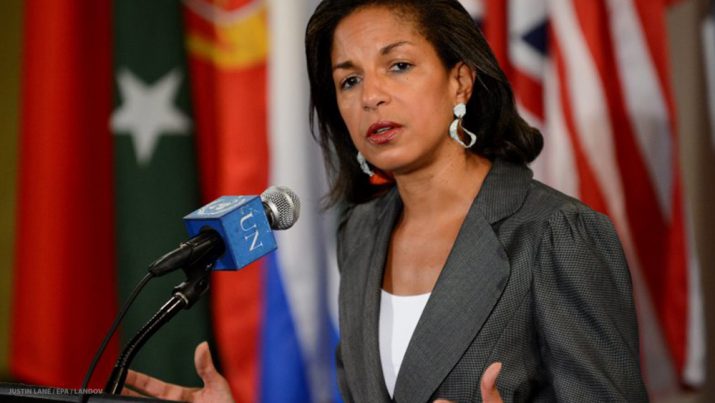 This is ten times bigger than Watergate… and it will likely see high-level Obama officials spending years in prison.

The #SurveillanceGate story is blowing up all over the Democrats today as it is now revealed that Susan Rice, Obama’s former national security advisor, was part of a massive criminal conspiracy to surveil and “unmask” President Trump campaign officials in an effort destroy Trump’s chances of either winning the election or governing after achieving office.

The Daily Caller is now reporting that Susan Rice ordered spy agencies to produce “detailed spreadsheets” with unmasked names and identities of Trump Team officials. This is a felony crime and a gross abuse of power at the highest levels, dwarfing the Nixon-era Watergate scandal.

Here’s a summary of the revelations so far (source links below):

Here’s the key reporting now coming out on this bombshell story:

From The Daily Caller:

“What was produced by the intelligence community at the request of Ms. Rice were detailed spreadsheets of intercepted phone calls with unmasked Trump associates in perfectly legal conversations with individuals,” diGenova told The Daily Caller News Foundation Investigative Group Monday.

Critics of the atmosphere prevailing throughout the Obama administration’s last year in office point to former Obama Deputy Defense Secretary Evelyn Farkas who admitted in a March 2 television interview on MSNBC that she “was urging my former colleagues,” to “get as much information as you can, get as much intelligence as you can, before President Obama leaves the administration.”

Michael Doran, former NSC senior director, told TheDCNF Monday that “somebody blew a hole in the wall between national security secrets and partisan politics.” This “was a stream of information that was supposed to be hermetically sealed from politics and the Obama administration found a way to blow a hole in that wall,” he said.

Doran charged that potential serious crimes were undertaken because “this is a leaking of signal intelligence.”

“That’s a felony,” he told TheDCNF. “And you can get 10 years for that. It is a tremendous abuse of the system. We’re not supposed to be monitoring American citizens. Bigger than the crime, is the breach of public trust.”

White House lawyers last month learned that the former national security adviser Susan Rice requested the identities of U.S. persons in raw intelligence reports on dozens of occasions that connect to the Donald Trump transition and campaign, according to U.S. officials familiar with the matter.

The pattern of Rice’s requests was discovered in a National Security Council review of the government’s policy on “unmasking” the identities of individuals in the U.S. who are not targets of electronic eavesdropping, but whose communications are collected incidentally. Normally those names are redacted from summaries of monitored conversations and appear in reports as something like “U.S. Person One.”

The chairman of the House intelligence committee, Representative Devin Nunes, is also investigating how the Obama White House kept tabs on the Trump transition after the election through unmasking the names of Trump associates incidentally collected in government eavesdropping of foreign officials.

The unmasked names, of people associated with Donald Trump, were then sent to all those at the National Security Council, some at the Defense Department, then-Director of National Intelligence James Clapper and then-CIA Director John Brennan – essentially, the officials at the top, including former Rice deputy Ben Rhodes.

The names were part of incidental electronic surveillance of candidate and President-elect Trump and people close to him, including family members, for up to a year before he took office.

The alleged spreadsheets add a new dimension to reports on Sunday and Monday by blogger Mike Cernovich and Eli Lake of Bloomberg News that Rice had asked for Trump aides’ names to be “unmasked” in intelligence reports… part of an alleged political intelligence operation to disseminate reports on the Trump campaign widely throughout government with the aim of leaking them to the press.

At the time that radio host Mark Levin and Breitbart News compiled the evidence of surveillance, dissemination, and leaking — all based on mainstream media reports — the mainstream media dismissed the story as a “conspiracy theory.”

Now, however, Democrats are backing away from that allegation, and from broader allegations of Russian collusion with the Trump campaign, as additional details of the Obama administration’s alleged surveillance continue to emerge.

Rhodes and Rice were both implicated in a disinformation campaign to describe the Benghazi terror attack in Sep. 2012 as a protest against a YouTube video. Rhodes also boasted of creating an “echo chamber” in the media to promote the Iran deal, feeding stories to contrived networks of “experts” who offered the public a steady stream of pro-agreement propaganda.

What has the corporate-run media done in response to this bombshell news that’s bigger than Watergate? CNN is now urging its viewers to completely ignore the story, essentially claiming it’s all “fake news” while insisting that its own conspiracy theories about Russian interference is the “real news.”

Since news broke Monday that the Obama Administration’s National Security Adviser, Susan Rice, directed the “unmasking” of NSA intercepts of Trump associates, CNN has raced to shoot down the blockbuster report.

CNN Tonight’s Don Lemon went so far as to announce he would ignore the news at all costs.

While interviewing a Democratic congressman, CNN’s Chris Cuomo claimed it was “demonstrably untrue” Rice sought surveillance of the Trump team, even as that’s exactly what yesterday’s reports prove.

Over the last 24 hours, the network has also repeatedly called on its chief national security correspondent, Jim Sciutto, to dismiss the reports as a non-story; Sciutto has even excused Rice claiming ignorance of the unmasking scandal two weeks ago, arguing Rice “wasn’t aware” what unmasking Rep. Devin Nunes (D-Calif.) was referring to.

So there you have it. It’s the biggest bombshell of (Obama) White House corruption and criminality since Nixon, yet the fact-hating left-wing media has decided in advance that “there’s nothing to see here.”

Can you imagine if all this had been discovered under former President Bush? CNN would be calling for impeachment, prison and charges of treason. But when Obama’s people pulled it off, it’s “not news.”

Stay informed as this story unfolds. Read Trump.news and WhiteHouse.news.