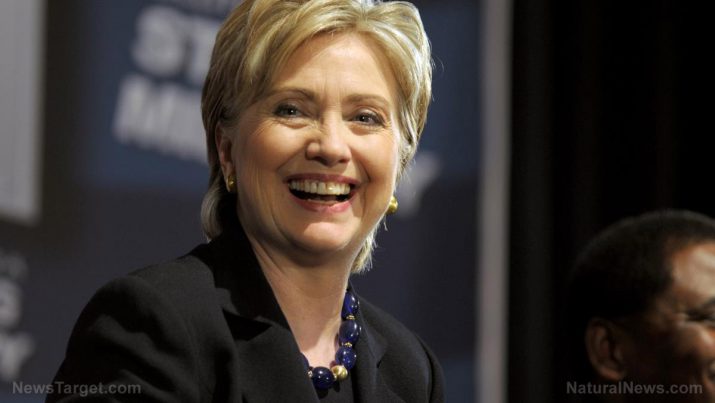 Hillary Clinton claimed on Monday that the Uranium One scandal engulfing herself and the Obama administration has all been “debunked.”

“It’s the same baloney they’ve been peddling for years, and there’s been no credible evidence by anyone,” said Clinton.

At issue: why Hillary Clinton’s State Department approved the transfer of 20 percent of all U.S. uranium to Putin’s Russia and why nine foreign investors in the deal funneled $145 million to Hillary Clinton’s foundation.

As the New York Times has confirmed: “As the Russians gradually assumed control of Uranium One in three separate transactions from 2009 to 2013, Canadian records show, a flow of cash made its way to the Clinton Foundation. Uranium One’s chairman used his family foundation to make four donations totaling $2.35 million. Those contributions were not publicly disclosed by the Clintons, despite an agreement Mrs. Clinton had struck with the Obama White House to publicly identify all donors. Other people with ties to the company made donations as well.”

2. CONFIRMED by the New Yorker magazine: Bill Clinton bagged a $500,000 speech in Moscow paid for by a Kremlin-backed bank.

The New Yorker confirmed that Bill Clinton received $500,000 for a Moscow speech paid for by “a Russian investment bank that had ties to the Kremlin.”

“Why was Bill Clinton taking any money from a bank linked to the Kremlin while his wife was Secretary of State?” asked the New Yorker.

Similarly, the New York Times has confirmed that: “shortly after the Russians announced their intention to acquire a majority stake in Uranium One, Mr. Clinton received $500,000 for a Moscow speech from a Russian investment bank with links to the Kremlin that was promoting Uranium One stock.

3. CONFIRMED by the New York Times: Despite claims to the contrary, Uranium One has, in fact, exported “yellowcake” out of America and is “routinely packed into drums and trucked off to a processing plant in Canada.”

The New York Times confirmed that: “Asked about that, the commission confirmed that Uranium One has, in fact, shipped yellowcake to Canada even though it does not have an export license.”

4. CONFIRMED by The Hill: The FBI has uncovered “substantial evidence that Russian nuclear industry officials were engaged in bribery, kickbacks, extortion and money laundering.”

The Hill confirmed last week that the FBI has uncovered “substantial evidence that Russian nuclear industry officials were engaged in bribery, kickbacks, extortion and money laundering.”