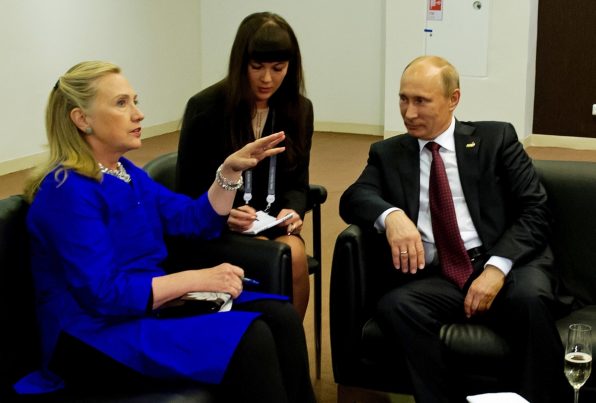 Alt-Left Democrats and their allies in the “mainstream” media have been creating one narrative after another to ‘prove’ that President Donald J. Trump and the Russians “colluded” to “steal the election” from challenger Hillary Clinton, none of which are true.

One of the most recent fabrications is the lie that Moscow flooded social media with tens of millions of dollars’ worth of phony posts and news stories in an effort to sway American voters away from Clinton and into the Trump camp.

In particular, Democrats and their #FakeNews media are claiming that Facebook ads placed by Russian operatives flipped the election in Trump’s favor, though there is absolutely no evidence anyone has yet offered to substantiate the claim.

Last week Democrats on the House Intelligence Committee released a number of Facebook ads that have been linked to a Russian troll operation during last year’s election cycle.

But interestingly enough, at least half of the ads were pro-Hillary, The Gateway Pundit reported. Also, Facebook executive Colin Stretch told the Senate Judiciary Committee that the total number of those fake ads were just a drop of water in an ocean — less than 0.004 percent of all content or about 1 in 23,000 news items.

-Russian Facebook ads comprised only .004% of total content.
-90% of the ads didn’t even target either candidate. pic.twitter.com/UlmBSW2TCC

And while Stretch, along with executives from Google and Twitter testified that they agreed Moscow was behind propaganda operations last year, they are equally certain — even without saying so specifically — that the amount of Russian trolling was so small as to be practically invisible.

Stretch said 29 million American Facebook users were served ads and other promoted content via their news feed from the Kremlin-based Internet Research Agency (IRA). Further, because of sharing and other promotions, as many as 126 million users may have also seen the ads. But if half of them were pro-Hillary, how can anyone possibly conclude (with a straight face) that Trump, and not Clinton, was the principal beneficiary of “Russian” interference?

This fake narrative — the Russians used social media and mass websites to spread a ‘pro-Trump’ message to millions — actually began shortly after last year’s election. The Washington Post reported on the ‘findings’ of a dubious, never-before-heard-of ‘research’ group that claimed Russian operatives spread misinformation via a “sophisticated propaganda” campaign via social media and more than 200 “right-wing” websites (including Natural News). (Related: Washington Post now admits its “fake news” story relied on… get this… a FAKE news source.)

The flood of “fake news” this election season got support from a sophisticated Russian propaganda campaign that created and spread misleading articles online with the goal of punishing Democrat Hillary Clinton, helping Republican Donald Trump and undermining faith in American democracy, say independent researchers who tracked the operation.

Sounds pretty damning, huh? Except that not even The Post fully bought into the very lie it was helping to push:

There is no way to know whether the Russian campaign proved decisive in electing Trump, but researchers portray it as part of a broadly effective strategy of sowing distrust in U.S. democracy and its leaders.

Then again, pushing its nonsense wasn’t about accuracy, it was about the creation of a false narrative The Post and Democrats knew a certain segment of the American public would believe.

When fake news stories like that one weren’t effective in separating Trump from his base of support among the electorate, the mainstream media began to tie the lie to the U.S. intelligence community, claiming at one point that all 17 intelligence agencies agreed that Russia ‘hacked the election.’ That lie, pushed by liars like former Director of National Intelligence James Clapper, was eventually exposed as a hoax as well.

J.D. Heyes is editor of The National Sentinel and a senior writer for Natural News and News Target.